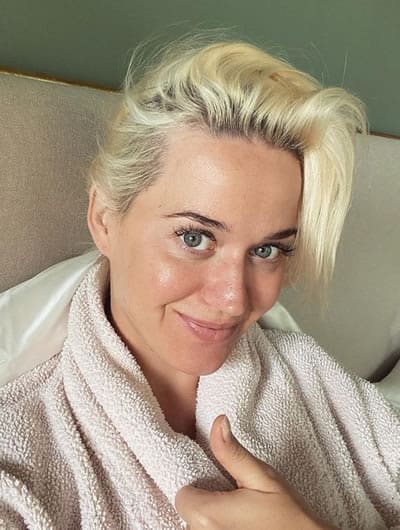 I’m sure you noticed this too.

Katy Perry is the type of superstar who uses a fair amount of makeup.

So if you’ve been wondering what she looks like when the eyeshadow and lashes are removed, then you’re in luck today.

Being in the show business means you’re always in front of the cameras, but this doesn’t mean you won’t be caught by surprise.

Apparently, she got caught barefaced too!

She was either looking for some inspiration for her new song or she straight out forgot to trim her eyebrows.

I think it’s the latter.

Unless you’re wearing waterproof makeup, I don’t think anyone can look this good when they are swimming.

So why does she look so pretty in the water?

I guess she’s born with it.

When the singer is recording in the studio, she likes to give her face a break by keeping things natural.

Nobody is watching anyway, except me!

Don’t worry. Katy is not sick.

I think she was just testing out her new banana look by going makeup-free.

It’s no secret that Katy has one of the funniest personalities in the music industry.

What’s making the singer so happy all of a sudden? She’s like a kid in a candy store!

Oh…I guess it must have something to do with her outfit. It looks delicious!

With her bare face hidden under a large beanie and black frame glasses, you will have to look twice to know it’s Katy Perry.

She kind of looks like a detective on a mission.

9. Before a Good Show

I think Katy was preparing for a show here but I wonder what she’s looking for?

Oh I get it…it must be her makeup artist.

I don’t know who this baby is but he’s making Katy very happy. Just look at her gorgeous smile!

Too bad I can’t say the same about the little one. He looks confused.

Katy was spotted on the street dressed in all black and I bet you she didn’t have eyeshadow behind those sunnies.

So this is how Katy put mascara on her eyelashes.

I can do that too.

I have always been a big fan of Katy’s short blonde hair. Even though she is at the beach, all wet and makeup-free, I still think it suits her.

On a closer look, I think she actually had eyeliner on.

Why does Katy look so scared and worried?

Did she see something scary? I don’t know about you but this picture reminds me of a scene from the horror movie, Blair Witch Project.

Was Katy in some sort of “bonding with mother nature” camp?

She certainly looks all-natural and refreshing with her hippie outfit. That is also one of the purest smiles I have ever witnessed.

Who needs to look like a star when you’re just taking your dog for a walk?

That poodle is adorable.

17. Turning Back The Clock

Here is a photo of Katy when she was just 18 years old. She clearly wasn’t into heavy makeups and was still finding her way into the business.

Despite being pregnant and in lockdown, Katy is telling fans that she is safe and well by giving them all a thumbs up. I’m so happy for her and she looks amazing!