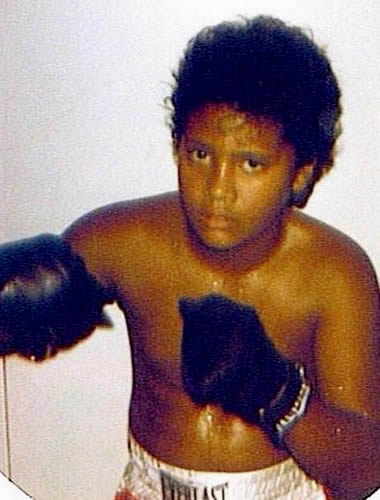 It’s amazing how much Dwayne Johnson has changed growing up as a young boy.

In fact, he didn’t look anything like ‘The Rock’ we know today. I mean…I certainly wouldn’t put my money on him to become a global star.

Thankfully, he proved me wrong.

I guess you can never tell when they are little.

Baby Dwayne was absolutely adorable back then dressed up as Santa Claus and crawling his way through a pile of gifts. He looks so active too, doesn’t he? No wonder why he’s an action movie star.

See, I told you this little guy is active. Now he wants to play ball.

Born in Hayward, California, Dwayne had a happy childhood growing up with his loving parents before things went down hill.

His dad was a professional wrestler (who would have guessed, right?) and his mother is also from a prolific Samoan wrestling family.

If you have been wondering where The Rock gets his massive body size from, now you know! These genes clearly run in the family from father to son.

Now, I don’t know why his dad put him in a pink suit here but Dwayne looked like a little girl. (Try telling him that today…I dare you!)

Growing up, Dwayne didn’t have many childhood friends, except Milton McBride Rosen. He is a Special Olympics athlete with down syndrome and together they have bonded a lifelong friendship.

Dwayne’s childhood world turned upside down when his parents experienced financial hardship. He developed an aggressive personality and would often get into fights in school.

He’s probably training for one of those in this photo…

Perhaps it was a “thing” back in the 80s, young Dwayne certainly changed his look with this afro hairstyle. Doesn’t he look cool? I actually think he looks quite handsome here as his facial features start to show some similarity to The Rock.

On second thought, he kind of reminds me of Bruno Mars too.

Like many teenagers, the superstar had his fair share of troublesome at the notorious age of 15. His temper has been soaring since his family was evicted from their home. He was arrested several times by the age of 17.

He actually looks quite skinny here, like a typical gangsta.

Since attending the Freedom High School in Pennsylvania, Dwayne was introduced to the game of football by the school coach and instantly fell in love with the sport. It was the perfect venue for him to release some of his anger and he was apparently very good at it too.

10. Show Me The Mustache

It’s refreshing to see The Rock with a mustache and he looks kind of funny too. I guess this is how the yearbook photos works…to look awkward!

As a promising football prospect, Dwayne Johnson was offered a full scholarship to study at the University of Miami where he played defensive tackle for the Miami Hurricanes’ national championship team. Check out those thighs!

Sadly, injuries kept him out of the main squad and he eventually graduated with a Bachelor of General Studies in criminology and physiology in 1995.

The star knew at a very young age that hard work is the only way to secure his future, so when his NFL dream was shattered, he quickly turned his focus to professional wrestling.

After numerous tryout matches, Dwayne got his first WWE debut (also known as WWF) under the ring name of “Rocky Maivia”. He still looks quite chubby here, don’t you think?

Since forming the tag team “Nation of Domination”, Dwayne decided to change his ring name to “The Rock” and has been using it to gain fame ever since.

In 2005, Dwayne “The Rock” Johnson decided to pursue a full-time career in acting. I honestly can’t believe how young he looks. He still had so much hair back then.

How can this article be complete without showing you some of Dwayne’s most valuable assets? His muscles! Looks like those old arms are still going hard.