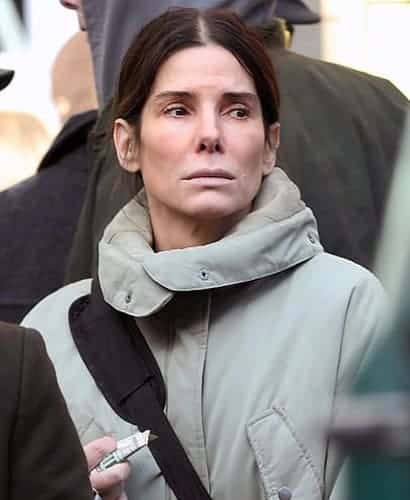 I don’t consider Sandra Bullock as one of the most beautiful actresses in America. In fact, I wouldn’t even put her in my top 10.

Don’t get me wrong. I still think she’s pretty and there is something about her face that’s easy on the eyes too.

Maybe it’s the makeup? I’m not sure.

That’s why I wanted to put this list together. I’d say it’s the best one out there as Sandra rarely goes barefaced in public. Enjoy!

Seeing Sandra in public is already a win but catching her without makeup is another big win. I think she agrees.

It’s never going to happen, I know that. But if Sandra was to become homeless, I think this is what she’ll look like.

3. No emotions in Vancouver

The actress was spotted in Vancouver shooting for a new Netflix movie, Unforgiven.

Maybe it’s just this partcular scene, but Sandra’s face look emotionless. Some people say she might’ve had too much botox and I’ve had similar thoughts too.

You know what? I don’t even care if she has makeup on or not because those black rimmed glasses looks so good on her. It is Specs-tacular!

When a woman goes to clothes shopping with no makeup, it means she is very confident in her natural beauty. Good on her!

You must be thinking where Sandra got that old telephone, right?

That thing is clearly vintage but it was for a movie where she played the famous novelist, Nelle Harper Lee. So I guess this scene was portraiting the 70s.

I see it all the time with celebrities.

Whenever they are makeup-free in public, they will try to hide their faces with a pair of sunnies. Sandra does it too.

I’m not talking about Sandra’s personality, although I’m sure she’s a down to earth person.

This was the moment she landed back on earth in the Oscar-winning movie, Gravity.

Let me take you back where Sandra was still in space.

If you’re wondering why she wasn’t wearing any eyeshadows or lipstick, she was alone and had nobody to impress.

It’s no secret that Sandra is an animal lover and doesn’t mind taking photos with them even with her bare face.

I guess she wants to let the cat be the star instead of herself.