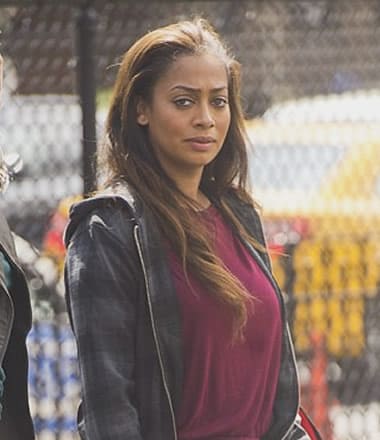 It’s no secret that Lala Anthony is an expert in beauty, fashion and cosmetics.

Living the glamorous life means you always have to look your best.

That’s exactly why I had so much trouble finding pictures of La La without makeup. She looks so gorgeous wherever she goes.

Yes, it took some effort alright but here are the latest ones I could find.

Wearing a white baseball cap and a purple top, La La was seen walking happily on the street.

Honestly, who needs makeup when you have a smile as beautiful as hers.

With several luggage and bags around her, it’s obvious that LaLa was rushing to the airport.

So why did I say rush?

Well, she clearly had no time for herself here. Instead, she chose to hide her makeup-less face and messy hair with a hat and a pair of sunglasses.

I’m not sure when this photo was taken but LaLa Anthony killed it in this black bikini. While her eyes are sparkling, some eyelashes would have done her wonders.

The star was spotted talking on the phone in a black hoodie wearing almost no makeup.

I think she had some eyeliners on, but definitely no lipstick, blushes and foundations of any kind. It’s pretty rare for her to go out in public like this.

The stunning Lala was spotting working out her arms at the gym. With a green headband and a ponytail, she looks more than ready for a tough workout.

Those weights she’s lifting looks rather heavy too. Go girl!

I’m not sure why Lala looks so frustrated here. Is it because she spotted a paparazzi taking pictures of her in casual clothes and without makeup on?

I must admit though…she does look tired. Maybe some eyeshadows would have helped.

While La La and Carmelo’s relationship has been up and down, there are many sweet moments too.

Here’s one where she and her hubby decided to go au natural at home. Why not?

In case you didn’t know, these two love birds have been dating for a really long time.  You know it’s true love when the man doesn’t mind whether his lady has makeup on or not.

I must admit, Lala (Alani Nicole Vázquez) looks very different back then. I don’t know if it’s the cosmetics, or if she’s really had some work done.

Lala Anthony was spotted having a walk with her son. I’ll keep her child out of the picture and let you focus on her natural face instead.

Lala and Eva Longoria are good friends. They don’t mind taking pictures together even if it means going bare faces together.

Here’s one where they did a new year resolution along with Loren Ridinger where they vowed to have no makeup and no filters.

Why is she pulling out six fingers here? Does that mean she has 6 more sets to go? Or maybe 6 more days until she finishes her training and diet?

Whatever the case, you know Lala is serious about sweating when she’s makeup free!

La la posted this photo on her instagram and my first reaction is aww!

I mean, is she really going to lick that? Well, at least they both don’t have makeups on so I guess it is harmless to her health.