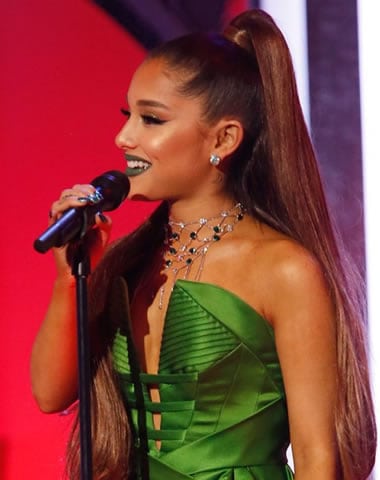 I have been a big fan of Ariana Grande for as long as I can remember. She is definitely on my top 5 list of the most beautiful female celebrities in the world.

Lately, I couldn’t help but notice how tan her skin has become. I mean, her skin color is literally changing before our eyes.

When Ariana first started out, she didn’t have dark skin. I’m sure. So, what has she been doing to achieve such a beautiful skin tone? Did she use artificial tanning lamp? Has she been getting natural sun lights only, or did her stylist use fake tan lotions?

I honestly don’t know but these 12 photos will prove my case.

1) She is a natural white

See, I told you! Ariana Grande has natural white skin.

As someone with an Italian background, I thought she would be more olive. She actually looks quite fair here, especially around her neck and collarbone area.

No photoshop, no lightening effects, nothing!

Sorry, I had to show you another one which includes her body. You can clearly see her arms and legs here. They are almost as white as pearls.

If I’m honest, she looked too pale for my liking.

This photo was taken around 2010. I believe Ariana has been absorbing some vitamin D at the beach and I absolutely love it!

Even though she isn’t as tan as she is today, but she looks so much healthier don’t you think?

I believe 2011 was the year when Ariana Grande first experimented with tanning as her honey tan clearly isn’t as natural as the previous picture. I don’t think this was a spray on either so she probably used a self-tanner cream here.

It’s evident that Grande was enjoying the feedback she’s been getting about her new skin. She showed up at the 2012 KIIS FMs Jingle Ball with an exotic tan matched with a gorgeous green dress that wowed every guest.

Perhaps she was making a statement that the color is here to stay and I don’t blame her because she looks truly amazing from head to toe.

Looks like Ariana was trying a bronze tan when she attended the 2013 MTV Video Music Awards in New York. While her skin tone does look more radiant, the bronze effect was a little too yellow or golden for me.

By 2014, Ariana has found the perfect style to accommodate her worldwide success. These include her trademark ponytail, high heels and tan skin.

8) They forgot her face

Looks like someone forgot about Ariana’s face when they tanned her body or her makeup artist simply put too much powder up there. What do you think?

Ariana has definitely stepped up a notch here as her skin color looks 50 shades darker. Since this is officially her “look” now so I doubt she used tanning lotions. If I had to guess, I’d say it’s either spray tan or she’s been sleeping on a sunbed.

I’m just glad she went with a lighter horsetail here. It’s spot on!

One way to find out whether Ariana’s darkened skin is real would be to check out how she looks casually. Surely, she won’t be putting fake tans on if she’s not preparing for an event, right?

And this casual sweater look proved to me that it is.

I wonder how much money she has spent at the clinic to get that gorgeous brown skin color. It certainly didn’t happen overnight.

With the release of her hit song, ‘Thank u, next’, Ariana went even further by going dark tan. She complimented her deep color superbly by wearing a ginger blonde hair wig.

Now that she has gone dark brown, what’s next?