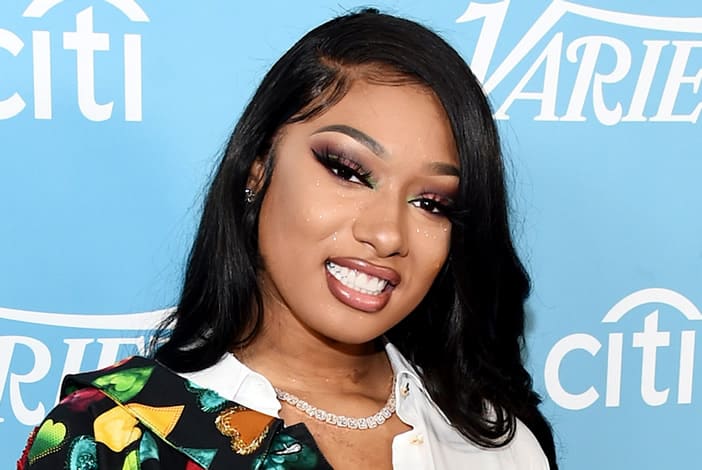 It’s not even a secret.

Megan Thee Stallion is a very pretty girl but she can get quite heavy with her makeup too. That’s why I’m so excited to show you these.

Yes, I’m talking about pictures where she is completely barefaced and without makeup. Ones that you probably have never seen before….until today!

What? Megan got arrested??

That is correct. It happened back in 2015 when the rapper got into a heated argument with her ex-boyfriend. Let’s just say things got a little violent and that’s why this mug shot was taken.

It looks like she was ordered by the cops to remove her eyeshadows before this shot as you can still see some colors around her eyes.

Sometimes, when Megan has no makeup on she looks like she’s about to cry.

Don’t ask me why.

We all know Megan has a great body but nobody sees the hard work she puts in. Here, we see the rapper hitting the gym without any foundation and lipstick. I’d say she was ready to break a sweat.

And if I look this good working out, I’ll be taking a few selfies too.

I totally get why Thee Stallion likes to write songs in bed.

She doesn’t have to worry about anything, anyone, and her head is not buried under heavy makeups either. I believe this helps to get the creative juices flowing.

5. Dancing With The Dog

This picture was captured during one of Megan’s makeup-less Instagram Live videos. The rapper was trying out a bottle of milk cleanse that tasted like white crayon (in her own words).

So what happened after she “successfully” finished the bottle?

She started dancing with her bulldog.

Here we have Wiz Khalifa taking Hot Girl Meg to a boxing lesson. I don’t know about you but it looks like she wants to kick some butt.

7. Freestyle Rap In The Studio

It was Monday and Megan decided to do a freestyle in the studio. This rap was a little different though without her sexy eyelashes but she still managed to pull me in with ease.

This is the perfect example of why Megan is so beautiful and flawless even without makeup. The fact that Revlon has chosen her to be their global brand ambassador just confirms it.

Of course, she has to show her fans a few makeup techniques with tutorials like this.

At this stage, I don’t care if the rapper is makeup-free or not because her curvy frame has completely taken over the selfie.

That body is seriously WOW!!