As one of the most popular VC models of all time, Gigi Hadid knows a thing or two when it comes to staying in shape.

Does she have a weight loss diet she swears by or a secret drink formula that helps her shed a few kilos?

The answer may shock you!

Today, I’m going to reveal the entire “edible menus” of Gigi Hadid and show you why her diet can easily satisfy any of us, is super tasty, and yet she doesn’t gain a pound. The meal prep delivery Ideal Nutrition states breakfast should be nutritious enough to fuel you till the next meal and still be satisfying.

Trust me, this list is enough to last you ALL DAY.

According to some experts, breakfast is the most important meal of the day as it helps to kickstart the body’s metabolism giving enough fuel to burn throughout the day.

So, let’s see what Gigi eats in the morning to start her engine.

It’s no secret that Gigi loves her eggs. The model has told US Harper’s Bazaar that it is her quick fix when waking up at 7am most mornings.

“I live near the Smile, and I love their scrambled eggs, bacon, and toast.”

“At home I love scrambled eggs and toast; it’s just an easy go-to.”

I can definitely do those!

When Gigi and Zayn Malik were still a thing (yes, they broke up again), she would occasionally have these tiny proteins for breakfast.

“My boyfriend (ex), being British, got me into breakfast beans, so that’s what I’ve been eating lately.

And in case you’re wondering what brand, this is what she told ES magazine.

Hmmm…now that Z isn’t cooking for her, I wonder if this is still part of her diet?

As part of her weight loss regime, Gigi spends a lot of time in the boxing gym. This is usually before lunch time so let’s see what Gigi likes to eat for lunch.

This may come as a surprise to some, but Gigi has always been known as a Foodie and burger is one of her favorite naughty food to keep her mind balanced.

“My personal motto is: ‘Eat clean to stay fit, have a burger to stay sane’.”

Some days after her boxing training, when her appetite is raging and tastebuds craving for a little fat, she would do some soul searching by chowing down her favorite cheeseburger at the J.G. Melon in New York City.

When Gigi feels like a healthy diet and keeping her calories in check, she may head back to Smile for her favorite arugula salad, a dish which she describes as being so tasty that she could eat it every single day.

While this Victoria’s Secret model does eat like the rest of us, she is a strong believer in clean eating too.

Look what she occasionally makes if she is at home for lunch.

Saturday in my happy place 🔪 Makin an apple peach crumble 🍑🍋🍏

That’s a healthy dose of vitamins and can definitely help lose weight.

It’s common knowledge that dinner is the least important meal of the day, especially for a supermodel. You simply don’t want the extra kilojoules storing while you’re asleep.

Most nights, Gigi cooks dinner at home but whenever she is dining out, there is one food she particularly likes and that is Japanese cuisine.

“If I’m going out, I like to go for dinner and drinks with friends. I love Bond Street for sushi.”

A meal that is full of omega 3, good fat and with the least amount of bad oil. Very good choice indeed.

I really shouldn’t have included this in the list but just in case she and Zayn get back together (likely…right?), then you can definitely add this to her menu.

“He makes a brilliant curry. Butter chicken is his signature dish. Don’t worry – he’s representing good for the British boys!”

At least he’s not making fish and chips.

When Gigi mentioned that she enjoys home cooking, I wasn’t sure what she meant.

“For a night in, I love to cook and watch a movie.”

Whether it is a light meal or something like this…

homemade din for mamma and sissy

Now if this was a portion for 3, then it really isn’t too bad.

Besides the pepperoni and cheese, she also added some vegetables…like capsicum?

Nevertheless, homemade pizza and movies really do go well together.

Now that we got her 3 main meals out of the way, let’s see what Gigi munch on for snacks.

According to Self, here are some of her common satisfactions:

Although I couldn’t say that these can meet your weight loss goals, at least they can be part of a well-balanced diet.

And you’d be equally impressed by her sweet tooth. 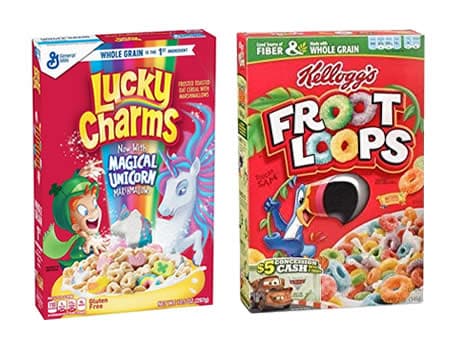 Yes, Gigi is apparently a big fan of Lucky Charms and Fruit Loops. These favorite cereals have become part of her sweet treats.

Most models would stay away from this heavenly indulgence in an effort to keep their weights in check, but Gigi Hadid certainly isn’t one of them.

“There used to be an Emack & Bolio’s on Houston Street, which is my favorite ice-cream place. One day it was closed and I almost cried.”.

Are those fruit loops? Life really isn’t fair now, is it?

No matter if you’re a fashion model or a bank teller, it is important to stay hydrated throughout the day. Let’s see what Gigi likes to sip on.

Being an international star, Gigi travels a lot but she finds it important to stock up her refrigerator in case she gets thirsty during her off days.

“In the fridge, I always have Evian, soda, orange juice, and lemonade.”

Not sure about you, but this is the pass I needed to refill my soft drinks. YAY!

If you didn’t know that Gigi is a die-hard coffee lover, where the hell have you been?

“I usually eat breakfast or have coffee before I do anything.”

Is that her own signature coffee cup from Starbucks?

She Likes Tea, Too!

It has been reported that Gigi developed a habit for tea drinking thanks to Mr. Z.

Now, I’m not exactly sure whether it is English breakfast she enjoys sipping on. But as far as I know, most teas help in weight control, aids the digestive system and provide loads of antioxidant.

So, I can’t see any reason why she would ditch this healthy habit.

Unless, of course (I’d keep this to myself).

How can a supermodel’s life be complete without a healthy cup of green smoothies?

Apparently, she likes to share her daily boost of nutrition with everyone around her.

Such a caring person!

So the verdicts are in…

Gigi Hadid is human after all

A superhuman perhaps because unlike what our mama has been telling us about the “starving” life of a supermodel, the same philosophy doesn’t apply to her.

This beautiful woman eats basically anything….pizzas, burgers, ice-creams, you name it and she’d occasionally have a glass of wine too.

Although she is a believer in eating healthy and in moderation, she doesn’t follow any strict diets and there is no weight loss meal plans to count calories with.

Eating balance is her thing (yes, she eats fast food too) but she also workout a lot!

Ok, that’s it, I’m off to book my next local boxing class.