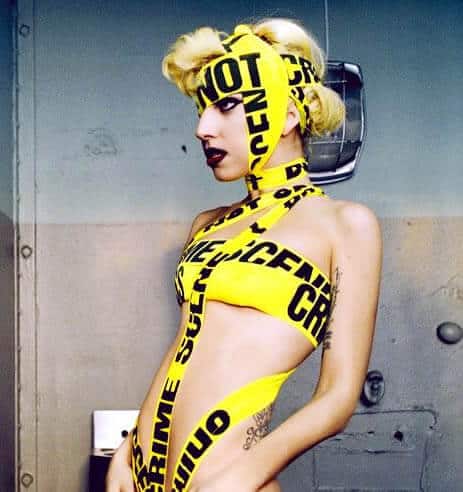 When it comes to crazy outfits, Lady Gaga easily tops the list.

Every time she steps onto the stage or the red carpet, you will see some of the most insane clothing and costumes.

While the singer has toned it down in recent years, let’s do a recap on some of her best looks of all time.

I’m guessing Gaga must’ve had so many new song ideas that she had to lock it all in with a human head cage.

If little red riding hood became an adult, this is probably what she’ll look like.

This tiger raincoat bought a sense of wilderness to Gaga’s eyes.

I loved how the yellow print contrasted her platinum blonde hair and the black stripe eye makeup was a nice touch.

Bubbles are nice and soothing to look at.

So when Lady Gaga wore this bubble dress on stage, it instantly had a calming effect. And when she opened her voice, she gave life to the bubbles and they sounded beautiful.

Correct me if I’m wrong.

Lady Gaga looks like a madwoman who just spilled tomato sauce all over her clothes.

Does anyone want ketchup?

7. Crystal Is The New Black

The singer created the new black with these crystal glasses.

Just when I thought her outfits couldn’t get any crazier, Lady Gaga showed up with this green frog costume.

I don’t think there are enough frogs. She wants more.

But it wasn’t enough for her. So she added a face mask and a crown.

Why bother attending a Grammys when you already look like a trophy?

I guess if you don’t win anything, you can still feel like an award.

I’m not sure what to make of this costume.

At first, it looked like she had tentacles coming out of her back. Then, the black spots kind of reminds me of the movie “101 Dalmatians”.

If Lady Gaga were to get married, this is probably what she’ll be wearing.

I mean…it is a beautiful wedding dress but that massive double plate headpiece is kind of ridiculous, don’t you think?

The “Born This Way” singer rocked up at the red carpet event wearing a spiral dress that looked like stars orbiting around her galaxy.

I wonder how she walked in those high heels though…

While her gown looked splendid, it was the golden feather hairpiece that sealed the deal for me. She looked like an ancient goddess from an Indiana tribe.

Lady Gaga has a reputation for being the most daring dresser in the music industry and she did not disappoint with this raw meat dress.

Yes, she broke the internet.

Is anyone surprised to see her dressed up as an octopus? I’m not. What surprises me though is how she can dance with that thing on.

Have you ever seen a Christmas tree that could walk and has a bodyguard by its side?

If you think Madonna’s famous cone bra was special, wait till you see this Lady Gaga top with flames and fireworks blasting right out of her chest.

She is clearly frozen, so technically, she must be dead.

Now if she is standing here then she must be a zombie!

I don’t know about you, but she looks like a Japanese sumo wrestler to me.

Graffiti is meant to be colorful and her mint green hair is just icing on the cake.

When the music stops, she will stop singing.

Is Gaga trying to get into the Avenger enterprise with this outfit?

She looks like an evil black ninja on a secret mission to destroy mankind. I believe her superpower is her voice.

Who said a demon has to be red or black?

They can be white too as demonstrated by the Gaga from hell.

Actually, was she meant to be a ram? Oh well…

Please put this in the Guinness World Record books, people. This is officially the largest hair wig in the world!

Now if they are not spider legs, then it has to be some type of furry creature…ewww!

Let’s not get religious here people but besides Whoopi Goldberg in Sister Act, when was the last time you saw a singing nun?

28. Telephone On The Head

Why would anyone put a vintage telephone on their head?

You can use police crime scene tapes and make it look fashionable too!

If I had to choose the craziest costume from the entire Lady Gaga collection, this gigantic spiky balloon has to top the list.

I wonder how many cars it stopped in Paris.

If Marshmallow had a girlfriend, I think she would look something like this.

Ladies and gentlemen, I introduce you to….LadyMallow.

Luckily, this happened in the streets of London during the day time.

Otherwise, she would have freaked out a few pedestrians.

There is a bomb in the city and Lady Gaga is here to take care of it. I mean, that outfit belongs to the bomb squad, right?

Has she been playing too much Minecraft or Roblox?

The singer turned herself into a blockhead and a furry one that is.

And what’s with the golden beak? Oh, I get it…she’s a bird!