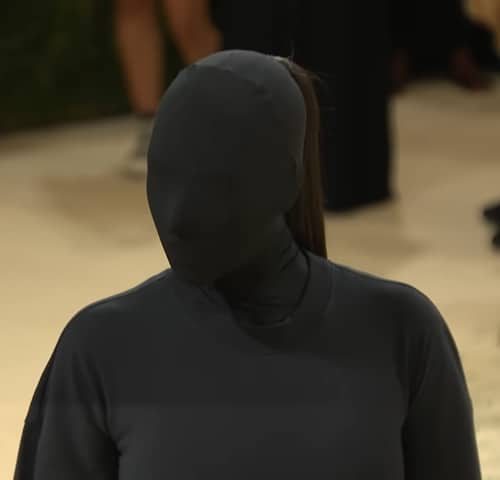 Was Kim Kardashian protesting in silence?

She saw all the bad things that have happened to America in the past 2 years.

The covid 19 pandemic that has taken thousands of lives, the Black Lives Matter movement, to the humiliating withdrawal of the US troops from Afghanistan.

Personally, I think Kim has had enough.

That’s probably why she chose this Balenciaga outfit.

In fact, something tells me that Kim K West didn’t want to be at the Met Gala 2021.

She is literally covered from head to toe.

Ok, I’m just making this up.

But since this year’s Met Gala requires every celebrity to wear a face mask when they are indoor, Kim might actually get away with this one.

Afterall, her entire face is covered up so I doubt the security guards can actually say anything to her.

Her way of asking people to get vaccinated?

It’s no secret that Kim is pro-vaccine.

She’s probably annoyed that half of the population in the United States is still unvaccinated.

Now, since she has “no choice” but to respect other people’s “freedom” of choice. This dress could be her way of saying to Americans,

“If you don’t want to get a jab, then you don’t see my face and body”.

My body, my choice!

(Well, Kim got that one right)

I’ve been hearing stories that women in Afghanistan can no longer leave home without covering up their faces and bodies.

Now I’m not sure if it is an offense to make Burkas like this.

But maybe Kim was trying to show these women that they too can look classy and gorgeous in similar outfits.

Or it was just her way of saying thanks to Joe Biden for the fate of women in the hands of the Taliban?

Again, these are just assumptions and Kim has never said a word about any of these things.

Don’t get me wrong either.

Kim looks great no matter what she wears (or not) but I have a feeling that she was trying to get some sort of message across in this one.